Cleaning the Air Through Ecosystem Interventions

Traffic sourced air pollution is a major contributor to human disease, with children and the elderly being most vulnerable to its toxic effects. While efforts to reduce this pollution at the source by implementing emissions controls at the automotive design stage have yielded great progress in the last 100 years, global health-care costs caused by traffic sourced air pollution are still in excess of 2 trillion dollars per year (Roy & Axel Braathen, 2017). Thus there is a need to mitigate air pollution after it is already created as a complement to emissions regulations. In indoor environments this can be accomplished by using recirculating air filters, and many schools use these to protect children from air pollution while they are inside at school. However, these do not protect children during outdoor activities, when exposure risk may be higher due to increased respiration rates.

Is it possible to clean pollution out of outdoor air?

In fact, numerous studies have found that trees and other vegetation can mitigate air pollution by capturing it on their leaves, by diluting it by facilitating vertical mixing, and by reducing air temperature. In order to quantify the health-care cost return on investment for planting trees, Hyphae and our partners on the Green for Good (G4G) team (Institute for Healthy Air Water and Soil, University of Louisville, Washington University in St. Louis, Louisville Metro Government Office of Sustainability, Owsley Brown II Family Foundation, and the Funders’ Network for Smart Growth and Livable Communities) sought to test the amount of air pollution that could be mitigated by trees at Saint Margaret Mary K-8 school in Louisville, KY, and to measure the effects of the tree planting on health biomarkers in the students and teachers at the school. This school is located directly downwind from a busy roadway, and so Hyphae designed a roadside vegetated air barrier to maximize the interception and dispersion of traffic-sourced air pollution.

Existing literature on air pollution mitigation by roadside vegetation includes the observation that as much as 37% of road sourced ultrafine particulates can be captured or dispersed during crosswind conditions when the trees have dense foliage and are planted close together (Al-Dabbous & Kumar 2014). However, inconsistent effects are seen when vegetation is sparse and the vegetated buffer discontinuous (Hagler et al. 2012). Tong et al. (2016) simulated particulate deposition and dispersion on roadside vegetated buffers, and found mitigation increased with increasing leaf area density and buffer depth, with 12 meter deep buffers performing much better than 6 meter deep buffers (where depth is the horizontal dimension perpendicular to the roadway length). Fuji et al. (2008) conducted wind tunnel experiments with different species of tree foliage and consistently found higher particulate capture by conifers than the tested broadleaf species. The planting at Saint Margaret Mary was therefore designed to be at least 12 meters deep and to have large conifers spaced closely together to maximize both deposition of pollutants onto leaves and dispersion of pollution via enhanced vertical mixing with cleaner air from higher altitudes. The length of the planting area was 75 meters, occupying one half of the front yard of the school. This left the other half open for control measurements. A photograph of the site prior to planting any new trees is shown in figure 1:

To address transportation agency concerns about sight-line obstruction and errant vehicle collisions with large tree trunks, the Saint Margaret Mary planting utilized herbaceous grasses (such as Andropogon gerardii and Panicum virgatum) nearest to the road, which have limited effects on sight-lines and pose no risk to off-course vehicles, but help fill in any air-gaps formed by tree canopies as they grow taller. Immediately behind these grasses are smaller shrubs and forbs (such as Ilex attenuata and Lonicera sempervirens), which while woody do not develop trunks larger than 4 inch caliper, and hence will break away during a car collision. These plants also do not produce large, high branches that could fall into the roadway. Behind these are the larger trees with full sized trunks, which are all at least 10 meters from the road edge. This first row of large trees are mostly pines (Pinus strobus), spruce (Picea abies) and cedar (Juniperus virginiana); evergreen species that are expected to be effective for air filtration, but do not leave much space on the ground for people to gather. A second row of large trees behind the first is made up of oaks (Quercus rubra & Quercus bicolor) and bald cypress (Taxodium distichum), which create tall canopies with space beneath them that is open, allowing students and teachers to utilize the space for outdoor activities. In locations with nearby overhead utility lines only multi stemmed trees (such as Amelanchier laevis) and shrubs are planted rather than large trees, to avoid damage to utility lines during high wind events. The resultant diverse mixture of vegetation types creates the foundation for a diverse ecosystem to thrive, while also maximizing potential mitigation of road sourced air pollution for occupants of the school. A photograph of the planting site after planting is shown in figure 2:

In addition to functioning as an air barrier; blocking the high concentration of air pollutants emanating from the roadway from reaching the school, the trees can also remove pollutants from ambient air, irrespective of traffic conditions. We can use estimations of the magnitude of this effect from the existing literature to project possible ambient pollution removal scenarios of the newly planted trees. By aggregating data and estimates from multiple sources (McDonald et al. 2007, McPherson et al. 1994, Nowak 2006, Nowak et al. 2006, Nowak et al. 2013, & Scott et al. 1998) we can calculate estimated values of ambient pollution removal by urban forests in grams per square foot of tree canopy area per year which are shown in Table 1.

Based on the estimated new tree canopy area of 5481 square feet, the values in table 1 can be multiplied to get the total estimated ambient pollution removal by the newly planted trees shown in table 2.

While these potential reductions in ambient air pollution are interesting, the decision to plant the trees in a dense row along the roadway was based on the assumption that higher pollution removal magnitudes will be achieved by using a targeted roadside air barrier configuration. There is also some data in the literature from which we can estimate this effect. Fuller et al. (2009) reported a diesel PM removal rate of 1.858 grams per square foot of roadside vegetated air barrier canopy per year; which is much more than average rates of ambient PM removal in non-roadside conditions shown in table 1. With 5481 square feet of new canopy removing 1.858 g/sqft-canopy/year, we can estimate that the new canopy could cause the removal of 10183 grams of diesel particulates in the first year. This is a very approximate estimate, as the actual removal will be strongly impacted by pollution concentrations, wind speed, wind direction, and due to the presence of several deciduous species, the time of year. A final report on the G4G project notes that after Hyphae designed and planted a dense vegetated air barrier in front of the school, the measurable ultrafine particulate counts/ unit air volume were 60% lower behind the barrier than in an adjacent open fetch the same distance from the roadway. Similarly NOx levels were 50% lower behind the barrier. Analysis of biomarkers from students and staff at the school found that after planting, circulating angiogenic cells were higher and immune cells lower than before the planting. In order to determine what aspects of tree planting configurations are important for generating these beneficial effects, Hyphae sought to analyze the implemented ecosystem in detail. After planting was complete, QK4 Inc. was brought in to capture a horizontal LIDAR scan of the installation. This created a high resolution 3D point cloud that can be used to assess the installation, test allometric methods (for example by using the method of Béland et al. 2014), and if repeated, to track changes in tree morphology over time. Renderings of the point cloud (with most of the overhead utilities removed for clarity) are shown in figures 3a and 3b.

Figure 3a: rendering of LIDAR scan of the installation

Figure 3b: rendering of LIDAR scan from corner

These 3D scans of the vegetated air barrier enable in-silico iterative design and simulation so that we can replicate the beneficial effects of this ecosystem design at other locations. One tool that we use to help with this process is computational fluid dynamics (CFD). Figure 4 shows a CFD simulation of the Saint Margaret Mary vegetated air barrier and its pollution mitigating effects. 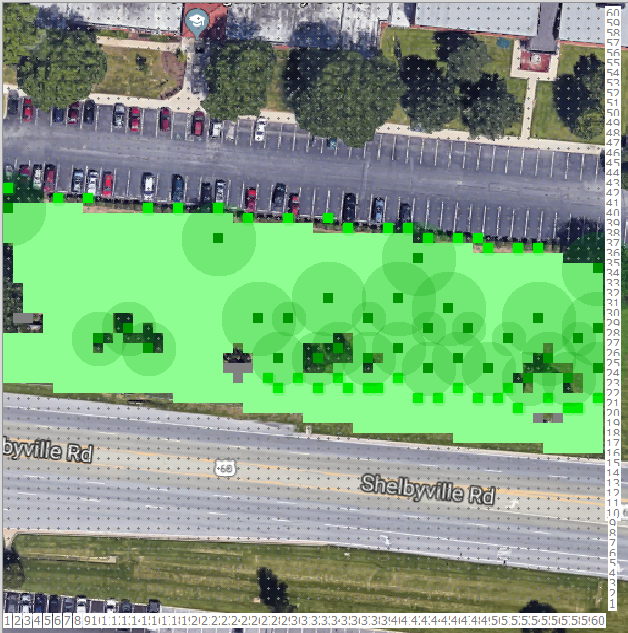 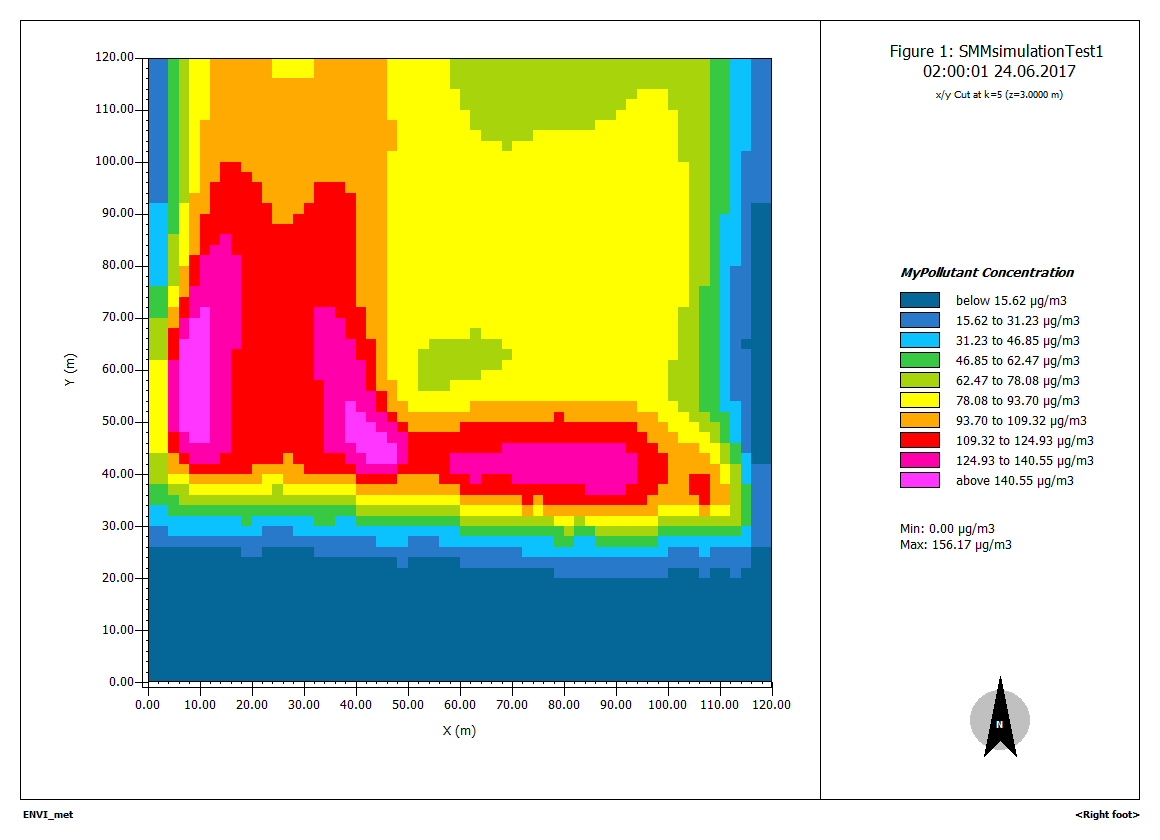 By using pilot data from projects like G4G to create models and simulations of other prospective sites, Hyphae can design site-specific ecosystem interventions that maximize the pollution mitigating potential of ecosystems to create healthy communities and reduce health-care costs.

Cleaning the Air through Ecosystem Interventions